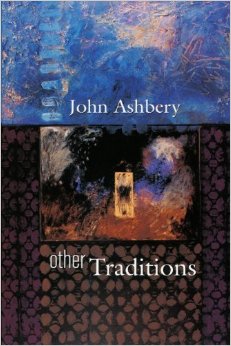 Other Traditions is the book-version of a set of lectures Ashbery held about several lesser-discussed poets. I can understand his apprehension or reluctance (or whatever you want to call it) to spend this time (or space) on the so-called ‘major’ poets about whom so much has already been said and written. How much more interesting is it to read about other writers! And while Ashbery gives us much interesting information about John Clare, Thomas Lovell Beddoes, Laura Riding and others, he does shed some light on his own poetry and views on poetry along the way. (For example, he finds the use of present tense annoying, p.18.) All of the poets he has chosen for this lecture series / book are minor poets whose work has influenced him in some way.

I particularly enjoyed his discussion of John Clare and the problem of one-trick-ponies — being very good at one thing, but one thing only. The theme of privilege (or lack thereof) is woven into these minor poets’ stories as well — poverty, Ashbery argues, was at least part of what drove Clare into insanity, and an over-zealous editor, very careful to edit out anything (“dialect words and ‘improprieties'”) that might detract from the one trick his pony could do, probably did not help much either. Ashbery presents Clare as a poet who sees and describes what he sees. There is something artful, something skilled in a good description that does not put on pretenses or try to shoehorn metaphysics into any shape it finds. Take this poem as an example:

I found a ball of grass among the hay
And proged it as I passed and went away
And when I looked I fancied something stirred
And turned again and hoped to catch the bird
When out an old mouse bolted in the wheat
With all her young ones hanging at her teats
She looked so odd and so grotesque to me
I ran and wondered what the thing could be
And pushed the knapweed bunches where I stood
When the mouse hurried from the crawling brood
The young ones squeaked and when I went away
She found her nest again among the hay.
The water o’er the pebbles scarce could run
And broad old cesspools glittered in the sun.

That last image is both surprising and beautiful, just as the fleeing mouse with her young is surprising and strange. And while there is of course the artifice of rhyme, there is little else here that draws attention to this poem as a poem, if that makes any sense. As a reader, I am interested, I follow his eye, and I am willing to believe that this is what he saw. Ashbery comments that Clare “could not hurt a fly or a word,” and what he means is that we need not expect him to do anything radical with his choice of words or use of words. It’s not what his work is about.

In his chapter on Beddoe, Ashbery touches on the ephemeral nature of poetry, especially poetry by minor poets: “Much of Clare’s asylum poetry and almost all of Beddoe’s work survived only because concerned admirers went to the trouble of copying it and publishing it” (23). He describes Thomas Lovell Beddoe’s poetry as “artificial and willfully decadent” (24), and while he considers both Beddoe and Clare as not favored by “accidents of time or geography” I would consider Beddoe as being favored at least a little: Wordsworth and Coleridge were family friends, his aunt was a novelist, his father the author of “one of the strangest books in English” (25) as well as a distinguished doctor (who at times used laughing gas for purposes of hilarity) — Beddoe was highly educated compared to Clare, and while he did not lead a happy life, he certainly enjoyed more freedom than Clare.

In any case, there is no real point in comparing apples and oranges, or even oranges and oranges. Beddoe, like Clare, produced some good poetry, and some rather bad poetry. His masterpiece is considered to be Death’s Jest Book,  a complex (convoluted) play that contains “many individual lyric poems of great beauty” (27) and was not published until after Beddoe’s death by his own hand, because his friends urged him to make many changes. Ashbery sides with other critics when he regrets Beddoe took his friends’ advice.

“What are we to do with a body of poetry whose author warns us that we have very little chance of understanding it, and who believes that poetry itself is a lie? Why, misread it, of course, if it seems to merit reading” (101). This is Ashbery’s take on Laura Riding. His feelings on her poetry: “I find much of it incomprehensible, some of it extraordinarily beautiful, and some of it terrible” (104). I find it a relief to hear a major poet admit very openly and publically that he doesn’t ‘get’ certain poetry (he explains a few pages before this that he’s never been able to enjoy Cummings, either). Of course we all know it’s okay — still, it’s nice to hear it happens to everyone.

Riding, as Ashbery presents her here, is very much the opposite of Clare: where Clare seeks to describe what he sees, looking out, Riding makes “her poetry a record of her mind becoming aware of itself” (107). His final verdict is that “[o]ne must misread Riding to be enriched by her” (119) — and again, that is okay, that is a legitimate use of poetry, and a risk we all agree to when we put pen to paper or finger to keyboard to stylus to touchscreen. It’s in the fine print.