A Visit to Seneca Village 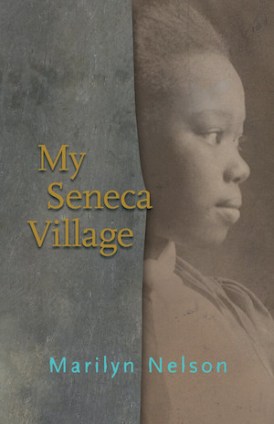 Marilyn Nelson‘s My Seneca Village (Namelos, 2015) will take you a century and a half into the past, to a village that no longer exists.

From 1825 to 1857, Seneca Village was a small, mostly African American settlement in New York. A number of African Americans living in Seneca Village owned the land they lived on, and while the land wasn’t great (stony, swampy), it did help their owners not only to a certain independence, but also made it possible for them to vote. In the middle of voter-fraud and voter-disenfranchisement discussions around the US mid-terms this year, how mind-boggling is it that 150 years later, voting is still considerably more difficult for people of color?

“Thanks to dropped tips, I’m a bootblack with his own place. / I may bow at their knees, shushing with the horsehair brush, / but I buff with spit on a rag to a mirrored face / aflame with pride, blazing like a burning bush.” (Land Owner, 3)

Seneca Village had its own school, and the education the village’s children received had an impact on their families, too. In “Gradual Emancipation,” the speaker Angelina Riddles explains: “I remained unlettered / until I became the student of my son” (17). The community was poor, but determined to look out for one another. Take, for example, “Miracle in the Collection Plate” – a poem about pitching in together to buy the fugitive James Hamlet’s freedom.

Over time, Irish and German immigrants joined the community. In the book, we witness compassion from Seneca villagers toward Irish families fleeing the potato famine, and we meet an eccentric German composer. In this community, different as these people are, their lives mesh together. There’s the moving poem in the voice of “The Deaf Boy” (69) who experiences piano music, and also “Counting Blessings,” written in the voice of an Irish couple:

“There’s Bridget and Michael and Catherine and Ann, / there’s Francis X, Moira, Theresa, and Sean: / none of them shivering, everyone fed, / head to feet sleeping, four butts to a bed.”

And, of course, there’s the love story between Freddy and Tildie, which we get to follow first through observation, then by reading his letters to her. Let’s not forget the soothsaying Epiphany Davis whose visions provide a sort of frame for the collection. Early on, he foresees the end of the village and also the far future.

Then, in 1857, it all ended when construction on Central Park began. In her introduction to the collection, Nelson explains that “Creating the park […] required razing Seneca Village, which had been one of the city’s most stable African American settlements, and displacing another roughly 1,600 poor residents, including Irish pig farmers and German gardeners, who lived in shanties nearby” (viii).

For a century, Seneca Village was largely forgotten, although there still are census records and maps that document its existence. Nelson’s collection is your chance to visit the village, see the residents interact, and eavesdrop on their conversations. I thoroughly enjoyed these poems. The characters Nelson creates out of names and census listings are full of life, and when I closed the book I felt like I had been there. I missed Seneca Village.