One thing Alice Miller is known for is her statement that ‘the child is always innocent.’ In her writing, she consistently defends the rights and needs of the child. At the beginning of her essay ‘Über die Verachtung‘ (‘On Contempt’), Miller illustrates how easily (and likely inadvertently) parents trivialize the needs of a child. The incident she describes is simple: on a sunny day, mother and father each have a popsicle, but the child is offered only ‘a lick’ or ‘a bite’ because he’s too little. The child reaches for the popsicle stick each time, and each time the parent scolds him and pulls away, so the child gets nothing. When the child cries in frustration, the parents are amused: after all, ‘it’s no big deal! No reason to cry!’

Miller argues that the parents could have shown more empathy. They could have intuited the child’s need better. Where the parents might think they did the child a favor by helping him learn he’ll not always get what he wants, and by protecting him from a tummy ache, Miller suggests the child may experience their behavior as an expression of contempt for him, for his needs, and for his desire to be included in their activity. 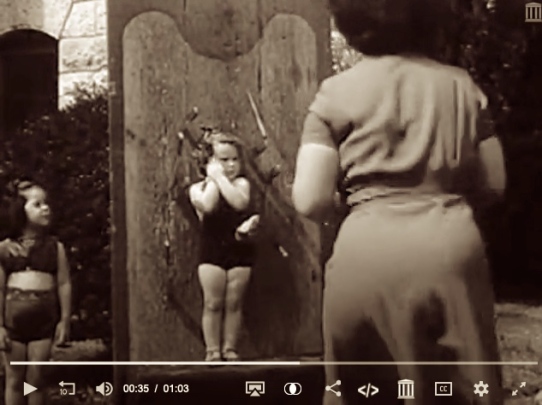 A Texas mother using her little girls as props for a knife-throwing act. “The Knife-Throwing Mother” (1950s). Watch the clip here: https://publicdomainreview.org/collection/the-knife-throwing-mother-and-her-children-1950s

In her work with clients, as well as in public accounts, Miller has observed that experiences of contempt can lead to idealized views of parents and / or childhood. She cites examples of three men who were beaten as children (if that’s not an expression of contempt, what is?!) and, as adults, go on to credit their success to this ‘tough love’ parenting.

This, she implies, is really a lie people tell themselves to avoid having to face the emotional pain they felt as children, – a pain that they still haven’t processed. In some cases, having children of their own allows people to revisit their childhood experience, but from a different angle: This time, they are not the helpless, wordless party. If they still believe the lie they’ve been told / telling themselves (along the lines of the old saying, ‘spare the rod, spoil the child’), they will likely repeat what was done to them, like the new father who told Miller that of course he will beat his child, after all, his father beat him and he turned out fine.

Women who had to take on much responsibility early in life raising their siblings (or standing in as a prop for mom’s knife-throwing act, as in the example above), may also tell themselves (and others) that this was a good thing, and this may shape the  expectations they have for their own children. Whether they perpetuate a cycle of contempt depends on whether they have had other opportunities to make up for the emotional growth they missed out on as children.

The negative connotations to expressions like ‘being childish’ or ‘being a baby’ speak clearly of an adult-centered, biased world view in which the needs of a child are less important than those of a grown-up. Miller criticizes this attitude. Children, as she already argued in ‘Das Begabte Kind’ / ‘The Gifted Child’, have every right to be childish, in fact, they need to be childish in order to be able to learn how to experience and manage their own emotions. Miller does not believe that infants can be spoiled by having their needs met (9). When we tell children not to be childish, we’re telling them that being a child – being what they are – is not good enough.

Detail from: An unhappy young child hung on a wall by his nurse, who has gone dancing. by H. Daumier, c. 1850. source: http://catalogue.wellcomelibrary.org/record=b1174424

In the essay, Miller outlines how early experiences of contempt, when internalized, can later lie at the heart of delusions and perversions. The pervert has embraced this outside contempt of himself so much that he needs to recreate and relive it again and again. Miller argues that therapists are not doing clients a favor in trying to be open-minded and tolerant / blaming the ‘perversion’ on society’s moral views: if the pervert suddenly found himself in a society where his behavior was perfectly acceptable, his problem would not be solved, he would have to find new ways to recreate his internalized disdain in others. Only by recognizing and facing his internalized contempt can he break his pattern.

The same goes for the sufferer of delusions, constant feelings of guilt or shame: “The inner necessity to create ever new illusions and denials in order not to experience one’s own truth vanishes once this truth has been experienced. We see, then, that we spent our whole life fearing and fighting something that cannot happen, because it has already happened, namely at the beginning of our life, when we were helpless.” (161-2, my translation)

Miller stresses how important it is for the analyst to resist the temptation to ‘raise’ the client: the analyst’s job is to help the client process and understand what s/he could not in childhood, but not to parent them. While the client may project parental roles and attributes onto the analyst, the analyst must not take on that role. The point is to meet the client where they are – an adult with the emotions they have shut away or internalized at some earlier point – and help them reach, on an emotional level, the maturity that they have reached physically. Once a client realizes s/he is repeating old conflicts rather than facing them (for example by always falling for a certain type of partner or seeking out specific situations), it is up to them to act on that knowledge. Experience is the way out of the vicious cycle of repetition: Miller is certain that once the old conflict is resolved, the repetition is no longer needed.

Other psychology posts on this blog: